skip to main | skip to sidebar

the wake up dance


These crazy little guys do the funniest head bobbing dance when they are waking up. Chris is convinced that when he bobs his head they answer him. And check out those big wings when he stretches. This one is already leaving the yard at night.
Posted by Val 0 comments

thanks for wishing..even if you picked the wrong star... 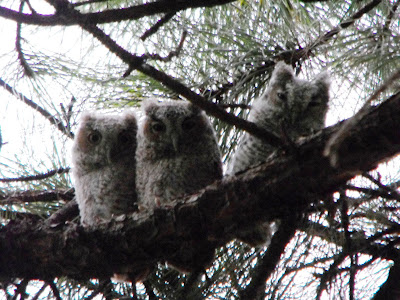 ...because I got my family photo but someone is missing. 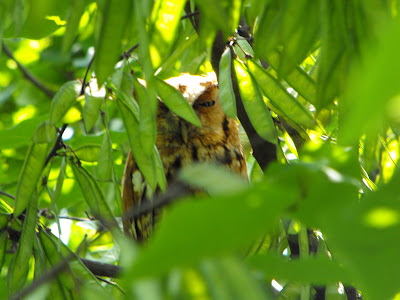 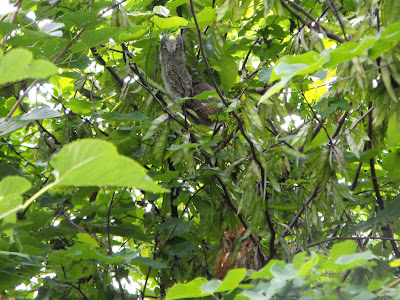 and can you pick out Missus with two of the owlets? 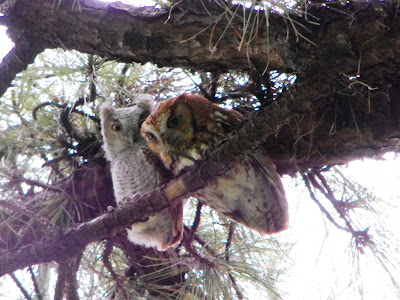 She's keeping them close and now I know why. 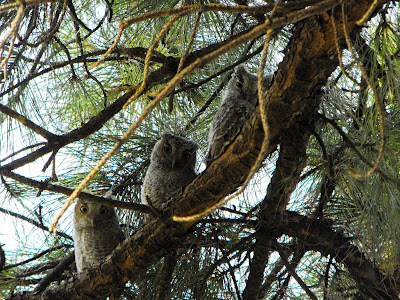 It turns out that three Eastern Screech Owlets is what we have this time around. There were four, but since Monday I've only seen three. Then today I found pieces of number four in the yard. I'm trying not to be too upset about it. It's what happens to wild animals. Somebody had to eat. If I think about it long enough I could grieve the little songbirds that have become owl supper. These little guys are so funny. I'm leaning towards names, so if you want to contribute speak now. There is one that is very independent, and two that are inseparable. I'll give you a hint on what names I'm thinking of. They made me laugh for all of the 90's, and still do on occasion when I really need a dose.
Posted by Val 4 comments
Labels: birds, my backyard, owls 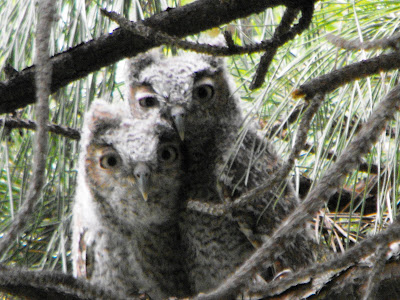 How many owlets can she fit in there any way?

(that one was for free folks)

Last night I had the privilege of witnessing the first owlet leave the nest. Later in the night two more must have jumped because when I got up this morning I counted three. Two of them stuck together like glue while the other was hiding way up high with the Missus. Mister stayed in his usual spot watching guard. Remember when I said in the last post that sometimes their posture is round and stubby when they relax? This is NOT one of those times. 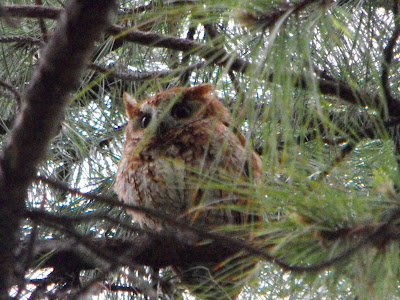 This is the round and huffy and gonna scratch your eyeballs out if you get any closer to my babies posture.


So I'm out there tonight just beaming and bragging to my pal Renate when owlet number four pokes a head out of the nest box. I did a quick head count just to be sure and yep...I counted to four and that's when all hell broke loose. It's been one of the windiest days of the season and there were lots of owlet hanging on for dear life moments. One of them got brave around dusk going from one branch to another. He got picked up by the wind and next thing you know he's in the grass. Then his pal panicked and followed. Next thing we know one is climbing the fence and the other is doing the flappy dance in the yard. Missus isn't sure if she should stay with they one about to leave the nest or watch the only one still perched on the branch. Mister is flying from grass boy to fence boy and back again. 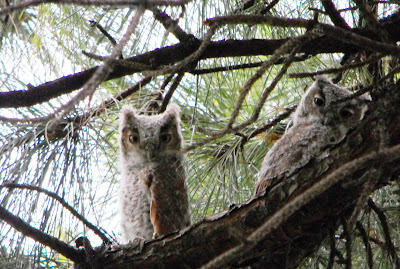 I wouldn't want to be Missus owl tonight for nothin. I hope they can keep them corralled and safe. I chose that moment to give them privacy and say a little prayer. As usual it was too dark for photos or video.

It's too tired, and I'm too late, or something like that. I had video to share but its just not happening tonight.

Now, if you'll all wish upon a star that all four owlets will gather on one branch tomorrow for a family photo op I'd greatly appreciate it.
Posted by Val 2 comments
Labels: birds, my backyard, owls

My friend and fellow Eastern Screech Owl lover Vicki asked a very good question. With both my adult owls being the red phase, how have I determined who is Missus and who is Mister? These little owls occur in two color phases or "morphs", red and gray. Often there will be one of each in a pair making it easy to tell them apart. There is little recognizable difference in the male and female ESO. The female is slightly, I mean a TINY BIT larger and the males voice is a little lower in pitch. When I decided to hang the nest box and dive in to the ESO watching I searched for literature on this particular species. So far I've only found one book dedicated solely to them by Frederick Gehlbach. I did my best to read it cover to cover. It's definitely a technical writing with lots of scientific terms and graphs.

So, Vicki, here's your answer. Our adult owls roost in our big pine tree that houses the nest box. From what I've learned through reading, the female remains in the nest almost all of the time during laying and incubating and I have observed this. Once the owlets hatch she will leave the nest more often and help the male with hunting and feeding. From the beginning of breeding season, the one I refer to as Mr. Spock roosts in the very same branch every day while Missus stays in the nest box often sticking her head out for a little fresh air. Later in the season I observe the Missus leaving the nest and roosting in a branch opposite of Mr. Spock. I've observed her coming and going from the nest to the exact spot on the same branch time after time. The only time I've seen one of them roost in that spot is after the eggs would have hatched. Because of this I'm fairly certain that as long as they are at their roosting spots I know hoo's hoo. Usually, when I take a photo and refer to the subject as Missus or Mister, they are at their roosting spot or I've observed them moving to or from their roosts. Here is an example of how hard it is. I took the pictures in this post at the same time. I snapped her in her spot, then turned and snapped him. Had they been side by side I would not have been able to tell!

The ESO will assume different postures making them appear different depending on the circumstance. When confronted by an intruder they will stretch tall and thin like this in order to appear more like a tree branch. 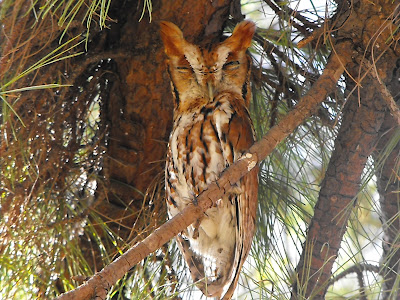 When resting they appear to be more stubby and round like this. 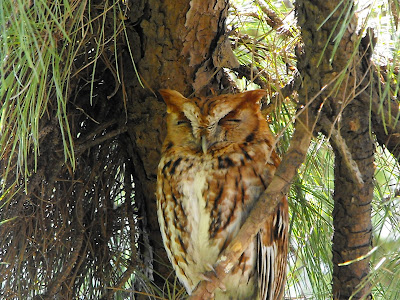 Both of these photos are of the same owl, Mr. Spock. I think. According to my scientific method! I had to come to some sort of conclusion to keep from losing my mind and now you know.

I am not a real ornithologist but I play on on TV. The TV inside my head that is.
Posted by Val 2 comments
Labels: birds, my backyard, owls 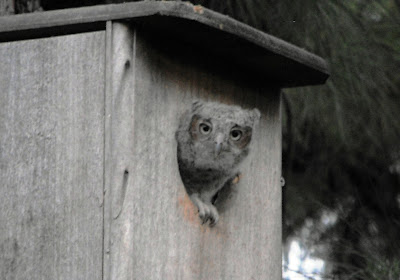 This evening I got the special gift of quality time with the owlets. Lot's of great video, not so many good photos. They come out at dusk when the light is so difficult.

Here's a little treat from tonight's show. More to come as soon as I can get the edit and clean up done. I managed to capture two of them shoving for a spot peeking out of the nest box. So we know once again there are two. Might there be three? Want to help me name them? Last year we had Elvis and Costello. Who are these little guys?
Posted by Val 3 comments
Labels: birds, my backyard, owls
Older Posts Home
Subscribe to: Posts (Atom)

Favorite Places To Stop And Read